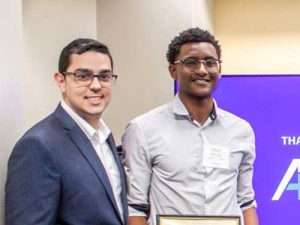 Plastics production is responsible for 232 million metric tons of greenhouse gases every year. In 2016, 65 million tons of plastic was produced for textile fibers, representing 20% of the total plastic production. Upon learning about the environmental problems caused by plastic/synthetic apparel Derek Saltzman and Mason Mincey decided to explore ways of addressing the problem.

Soarce aims to bridge the gap between performance and sustainability by using leftover plant matter from local suppliers and for their material to weave into the athletic and industrial clothing manufactures across the country.

Then one day at the library it hit them, why not pull components from crystalline cellulose? The material would then be stronger than steel, but lighter said Mincey. The goal was to create a fiber that is eco-friendly but also produces a breathable material for athletes across the country.

Competing two other times in the Joust, Mincey and Saltzman never gave up on their business. It was their persistence and constant innovation that won them first place at UCF Joust New Venture Competition in 2021. The company received a $12,000 check and more than $25,000 in essential business services.

Mincey said that though they won the competition, he admires the hard-work his competitors put into it. He recalled that one of the competitors was his very own student, Kelly Shea, that he coached at UCF Blackstone Launchpad.

“I was coaching her and it was crazy to see her in the finals that year with me,” Mincey said. “I’m like ‘Wow I think I coached you a little too good now,’ but all jokes aside she is killing it and I’m super proud of her.”

Mincey said that because their name has been in the Joust since his freshman year, it gave them the credibility they needed to win.

Since the competition, Soarce has been able to expand their production quality and have been contacted by big name-brand companies within the athletic industry. Mincey said that though he couldn’t disclose the name of the company, it was the Joust competition that gave them the opportunity to be in contact with them.

“So when we won the competition we were only able to make a fiber that was short, weak, it wasn’t really strong enough to be made into a product,” said Mincey. “Since then we’ve been able to spool fibers that are meters and meters long. We’ve been able to get a co-manufacturer to make clothing out of it.”

Mincey said that being recognized by local companies such as Alpha Authentics was a huge success to them. With the deal, Soarce materials will be used in UCF sports wear. With what Soarce is building, Mincey said that their main focus is to help people understand what the impact their clothing has on the environment.

The advice Mincey has for future entrepreneurs that compete in the Joust, is for them to never stop pitching and to not focus too much on the technology of your brand.

“Always keep pitching. Pitch. Pitch. Pitch as much as you can!” Mincey said. “… Storytelling is the most important part of the pitch.”